Homebrew is a popular package manager for MacOS. It provides easy access to thousands of programs and applications. It is developed and maintained by an open-source community on Github. Use Homebrew bundle to backup and restore your Homebrew configuration.

If you haven’t installed it yet, go take a look quick on brew.sh or just install it by running the following command in the MacOS terminal.

The installation should succeed without problems. Installing some nice tools is also easy:

To install a better alternative to the standard process viewer top.

This is where the magic happens. If you ever used npm, bower or another package-/assetsmanager you might be using dependency files that list a number of packages or assets that are to be installed. Brewfiles do about the same but then for your Homebrew configuration.

Dumping all of your Homebrew packages at once

Run the following command to create a text file named Brewfile with all Homebrew packaged installed on your system:

This creates a file with a lot of entries:

Keep this file safe in your cloud filestorage like Dropbox or e-mail.

Change your working directory to the folder containing the Brewfile. Then, to install/restore all items in the file, run: 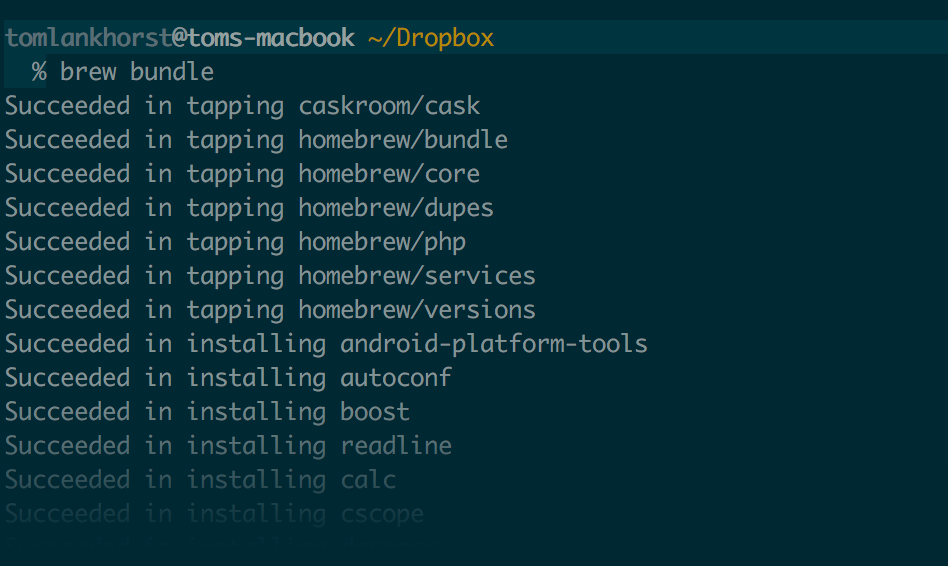 Installing a number of packages using a Brewfile.

The Brewfile syntax is easy. Each line is a command that gets executed. First, create an empty Brewfile:

Then – as an example – add a tap, a two brew packages and a cask respectively: